Following on from the FastNet tournament, Manchester Thunder kitted out in pink dresses faced Loughborough Lightning. Throughout the game there was lot’s more fundraising including a bake sale, chuck a duck and the auctioning of the players dresses. Thunder secured a win and a considerable amount of money was raised.

On the same weekend, we had our Lancashire development officer, Steph, at national schools manning the raffle. The great prizes helped the tickets sell raising over £200 to donate to CRUK. 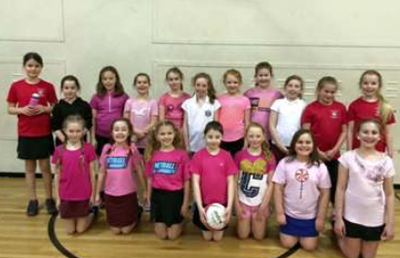 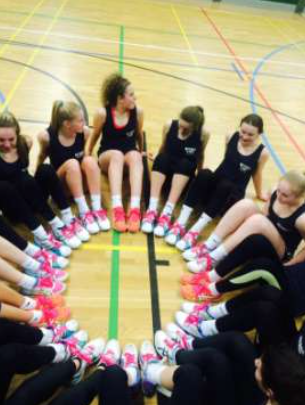 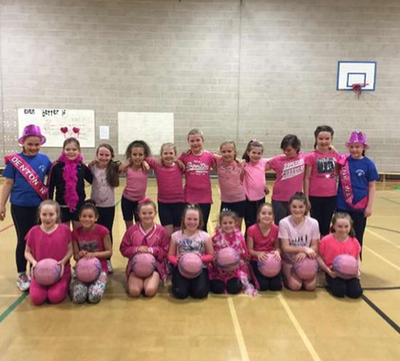 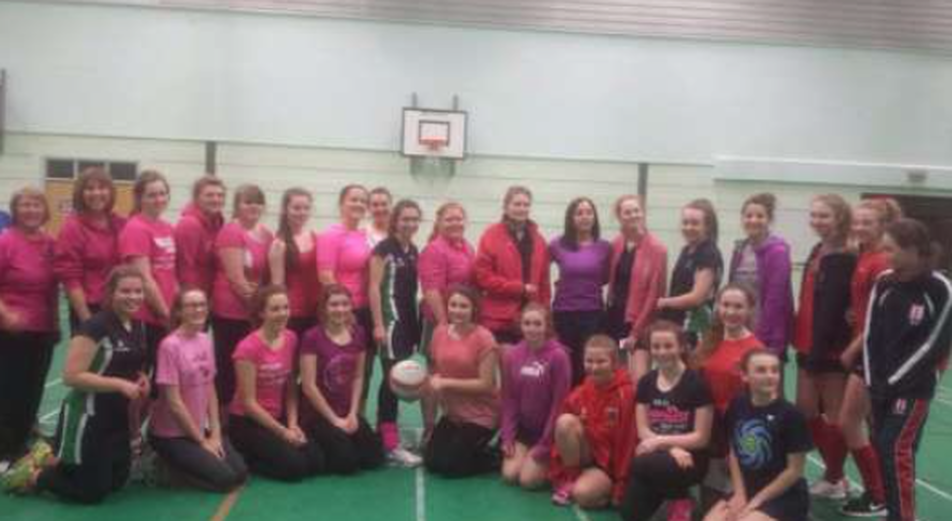 Cumbria Back to Netball Festival 2015

The event which raises money for Cancer Research UK attracts players from across the County that have returned to the sport or have just recently began playing. The festival provides the opportunity to play teams that are the same standard as them in a slightly more competitive environment.

This year saw four teams enter, Copeland, Penrith, Solway Thunder and Kendal Kobras. The teams played each other in a round robin competition, with games lasting 34 minutes. It was interesting to see the results come in as each game was only won by a few goals showing the standard of play was very similar for each team. This is a brilliant achievement for those teams and players who have only recently re discovered the sport.

Throughout the day the volunteer umpires were selecting players from each game who they thought were the player of the match. These nominations were counted and the overall winner would receive a prize. Amie Drewitt from Kendal Kobras was presented with the prize at the end of the day.

The umpires and volunteers were also keeping an eye out for good sportsmanship and excellent play and this award was presented to Jen Woodend from Penrith.

Once each team had completed all 3 games the scores were added to decide who had won this years festival.

The event would not have run without the tremendous efforts of the volunteers – all from Copeland Netball League – Holly Wilbraham, Nikki Robinson & Paula Ratcliffe. They were thanked and presented with a small gift for all their help.

Whitehaven Sports Centre supported the event and thanks were extended to them. In total £218.62 was raised for Cancer Research UK.

Sonia Dryden Netball Development Officer for Cumbria said, Once again this event has been amazing. The enjoyment of the players was clear to see, with everyone really getting into the spirit of things.  It’s really brilliant to see so many ladies taking up netball and rediscovering the game. If anyone would like information about Back to Netball Sessions across Cumbria please do get in touch. Sonia.dryden@englandnetball.co.uk 07540 127 403. 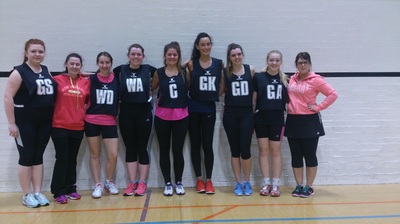 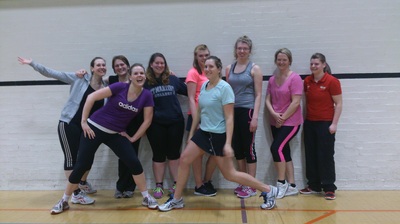 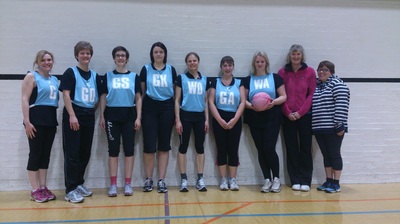 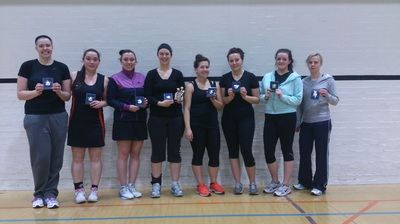 The Challenge was very kindly hosted at St Bees School and started at 9.00 AM Friday 6th March until 9.00 AM Saturday 7th March. In total 176 people took part in the challenge playing various versions of netball – High 5 Netball, 7 a side netball and Fast Net.

Schools, colleges and community clubs / teams took it turns throughout the day to keep the challenge going. St Bees School 2nd form kicked the challenge off at 9.00, with Primary schools – Bransty, St Bridget’s Egremont, Montreal, St Bees Prep School and Beckermet talking the challenge on until lunch time.
It was then the turn of staff from St Bees School with the annual men v women match – the men were victorious this year winning the game by one goal!
Into the afternoon, St Benedict’s school came along with their G.C.S.E group. They played netball and were able to receive some top netball tips from visiting North West Netball Volunteer Estelle Graham.

St Bees School 6th Form carried on from there until 4pm when the players from Lakes College and the local netball leagues (Copeland and Workington) started to arrive to see the challenge through the night until completion at 9.00 AM Saturday.

Everyone who participated or spectated had the chance to donate money, buy raffle tickets and even have their nails painted by Daisy Wilbraham who volunteered her time in return for donations. Morrison’s in Whitehaven provided cereal bars and water which were very well received as were the water bottles from Active Cumbria and the generous food and cakes that were constantly being dropped off by friends and family.

The atmosphere was truly amazing, everyone helping each other throughout the night. The team from Lakes College which included some male students really kept everyone going and were just a joy to have around.

So far the money raised totals £1054.33 with more donations to come. Sonia Dryden, Netball Development Officer for Cumbria said. The challenge has been a great event and the money raised so far is absolutely fantastic. I couldn’t have envisaged it being any better. I am so completely overwhelmed by the generosity of everyone who took part and supported. It’s been amazing to have a mix of people playing netball with all the variations of the game on display. We certainly wouldn’t have been able to hold the event without the support of St Bees School who looked after us brilliantly. I would like to say a huge thank you to everyone who took part, supported, donated and volunteered.

Pink Netball fortnight continues this week, with collection buckets at the local league nights, a F.E / 6th Form festival on Wednesday at Lakes College and the annual Back to Netball Festival which takes place at Whitehaven Sports Centre this Sunday. 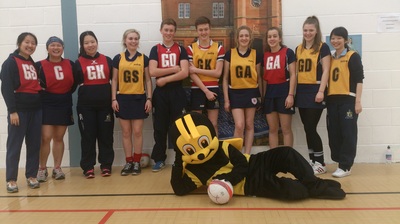 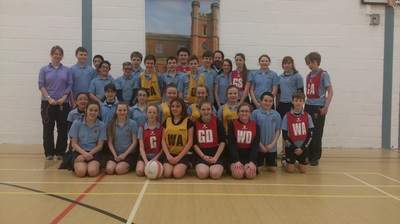 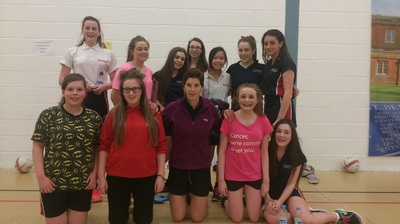 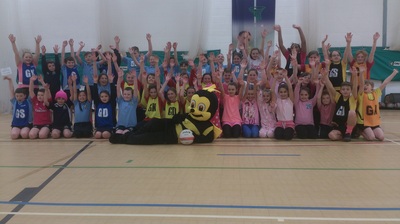 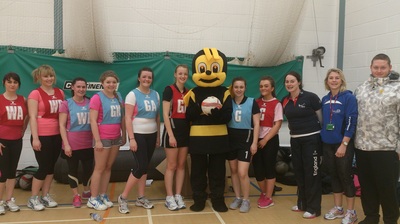 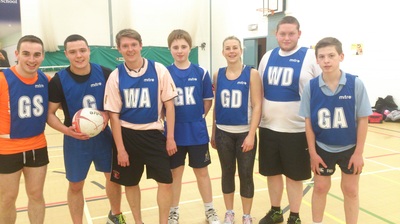 On Thursday 19th March we held a Charity high 5 tournament in aid of raising funds for Cancer Research UK. The tournament was held at Leyland and 18 primary school teams entered which was fantastic, totally to a massive 134 young netball players on show.

The 18 teams were split up into two pools and games were underway by 1pm. Lots of schools and teams made effort to make donations and raise awareness for CRUK by wearing something pink! The day was about having fun, taking part in lots of friendly competition and supporting our partnership charity CRUK!

In total we raised a HUGE £669.10 for Cancer Research UK, but we must say a big special mention and thankyou to St Marys Oswaldtwistle Primary School for donating a massive £177.00 of that money after doing some fundraising at school! An excellent contribution and a school to be very proud of!

Each pool consisted of 9 teams ensuring each primary school had at least 8 full games of high 5 netball. The results from the pools were:
After the pool competitions were complete, 2 semi-finals took place, with the two top teams from each pool going through.

St Marys Langho and Longsands won their semi-finals taking them into the final and St Barnabas and Pikes Lane played for 3rd/4th place.

I would like to say a huge thank you to all teachers, players, parents and volunteers for supporting the event. It was a great success and I look forward to seeing you all again in the future! 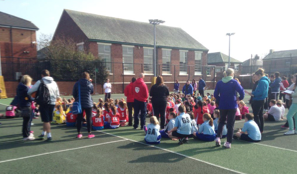 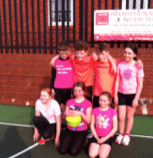